Carol is a valuable member of the Chics organizing committee, and is a flight instructor at Central Alberta Gliding Club. You’ll meet her this year at the flight line.

1. What is your aviation background?
I have always been interested in airplanes, and when I was younger I wanted to be an aeronautical engineer. I started out university in aeronautical engineering, but eventually graduated in materials engineering. I still had a love for airplanes, and eventually got a job as a Structures Engineer for Canadian Airlines in Vancouver. I worked for Canadian Airlines and then Air Canada for a total of 6 years. During that time I met my future husband (a glider instructor) and learned to fly gliders. I took several years off from “professional” aviation to have 2 children, but still continued on with the glider flying. I have been working for the last two and half years as a Methods Engineer at Viking Air in Calgary. Viking Air owns the type certificate for the Twin Otter, and we have put the Twin Otter back into production. 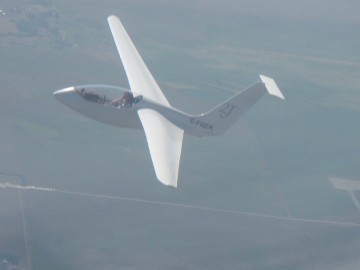 2. What got you interested in soaring?
I had always been interested in aircraft and soaring. When younger, I wanted to be an Air Cadet to have the opportunity to fly in a glider, however there were only Army Cadets in the town where I grew up. (I am a proud supporter of the Cadet program and learned many skills as an Army Cadet) When I met my future husband, who was a glider instructor, I absolutely wanted to get out and try it as soon as possible.

3. Tell us about a memorable flight.
My most memorable flight was a cross-country flight I attempted in 2009. I was attempting to fly a 300km triangle for an internationally recognized soaring badge. The day was challenging and several times I considered abandoning the task I had declared. I persevered and finally got to the point where I thought I was going to make it. The day had been long, and in soaring, the conditions die out as the sun gets lower. I eventually landed my glider only 4km short of the field, so did not complete the task. That flight lasted six hours and forty-two minutes and although I did not reach my goal, I learned a lot about soaring that day.

4. Have you ever been scared while flying?
My scariest moment was soaring in Southern Alberta and landing my glider up the side of a hill in an off-field landing. I hadn’t realized how steep the terrain was in the area. I now pay a lot more attention to the area beneath me and try not to put myself in a situation where I need to be lucky to have it work out.

5. Why do you think there aren’t many women in aviation? 6. Why should
there be more?
Aviation has traditionally been male dominated. Most women aren’t interested in mechanical/how-it-works types of things. The beauty of soaring is that you don’t need to know a lot of mechanical parts and pieces. It has been called “aerial ballet” because the gliders dance around the sky, rather than defeat it with noise and fuel.

7. How long have you been a pilot?
I started flying gliders in 2000, and earned my glider pilot license in 2001. I earned my glider flight instructor rating in 2008. I have participated in several Provincial/Western Contests and flew in the Canadian National Soaring Contest in 2009.